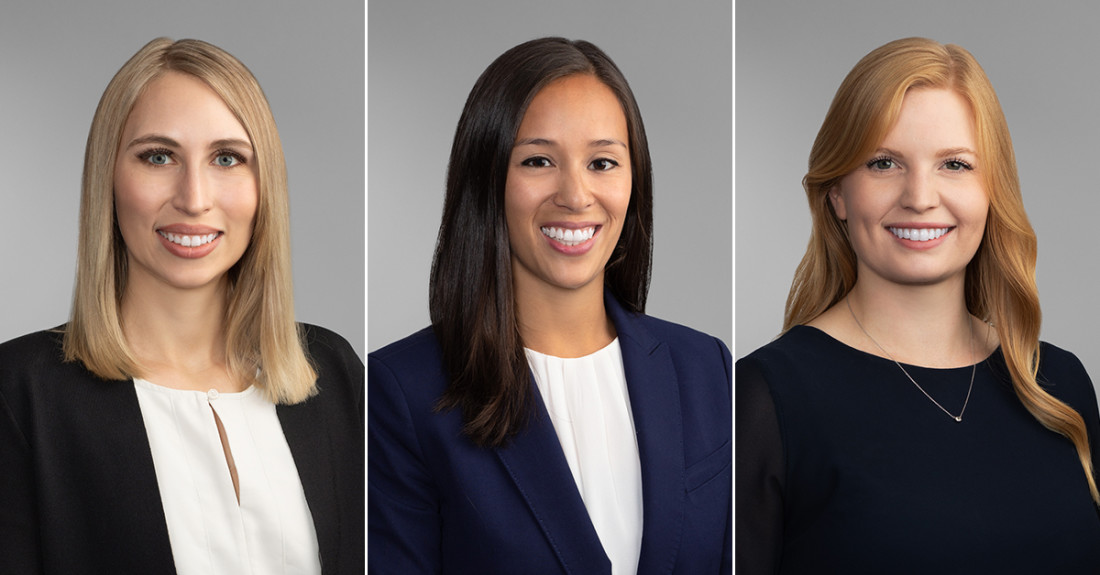 Asti Gallina joins the firm’s Litigation practice in Spokane. She earned her J.D. from the University of Washington School of Law, where she was Managing Editor of the Washington Law Review. During law school, she received the CALI Excellence for the Future Award®, recognizing students who earn the top ranking in a law school course, in Contracts, Legal Writing, Federal Courts and Persuasive Writing. Prior to joining Foster Garvey, Asti was a law clerk for the U.S. Court of Appeals for the 9th Circuit and the U.S. District Court for the Eastern District of Washington.

Mikaela Louie joins the firm’s Health Care practice in Seattle. She earned her J.D. from the University of Washington School of Law, with a concentration in Health Law. While in law school, she was an active member of various groups, serving as Associate Notes & Comments Editor of the Washington Law Review, Co-President of the Jewish Law Student Association and a Gregoire Fellow. Additionally, she is a champion of Alzheimer’s care and research initiatives. Since 2013, she has been a volunteer leader of the Alzheimer’s Association, Washington State Chapter, where she currently serves as Chair of the Board of Directors. Prior to joining Foster Garvey, Mikaela was a judicial extern for the Honorable Mary Yu of the Washington State Supreme Court.

Victoria (Redman) Williamson joins the Business & Corporate Finance practice in Seattle. She earned her J.D. from the University of Oregon. During law school, Victoria worked with the University of Oregon Business Law Clinic, where she advised clients of all sizes from single-member LLCs to large, international corporations. She also clerked for the Oregon Department of Justice Commercial Litigation Section, where she worked on a team that helped resolve a multi-million dollar lawsuit. Prior to joining Foster Garvey, Victoria also externed for the U.S. District Court for the District of Oregon and was a tutor for the University of Oregon’s Legal Research and Writing program.

Foster Garvey PC was established through the combination of two storied Pacific Northwest-based law firms, Foster Pepper PLLC and Garvey Schubert Barer, PC, in 2019. Foster Garvey is now one of the largest firms in the region with 180 attorneys in six offices in Seattle, Portland, Washington, D.C., New York, Spokane and Beijing, offering an extended national and international reach to serve several of the most influential and innovative companies, governments and individuals in the country across the full-spectrum of legal services. The firm's attorneys are consistently recognized for their deep industry knowledge and superior client service by prominent legal industry publications including Best Lawyers in America©, Chambers USA and U.S. News-Best Lawyers “Best Law Firms.” In addition to providing efficient and effective counsel, Foster Garvey will continue to provide a strong commitment to community service, pro bono work, diversity and inclusion efforts, and a collegial and equitable work environment.