Stan Barer Honored in Beijing for 40 Years of Contributions to U.S.-China Relations 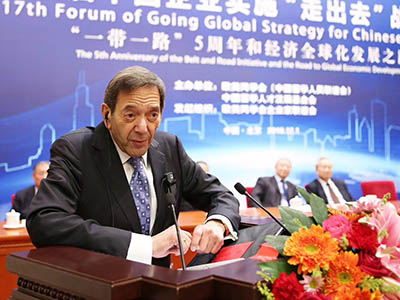 SEATTLE (December 17, 2018) Stan Barer, name partner at Garvey Schubert Barer (GSB), was honored in Beijing on December 1st with an Award of Achievement by the Western Returned Scholars Association Entrepreneur Alliance (WRSAEA) for his contributions to U.S.-China relations over the past 40 years. A member of GSB’s advisory committee and of counsel, Barer is also the chairman emeritus of Saltchuk Resources, Inc.

Barer successfully negotiated the resumption of shipping service between the People’s Republic of China and the United States in 1979, and established GSB as one of only 11 law firms in the United States officially recommended and approved by the Chinese government for representation in transactions with Chinese entities. The firm’s representation of the China Ocean Shipping (Group) Company (COSCO), which sailed the first Chinese-flagged ship to the Port of Seattle in 1979 as part of the resumption of trade, continues to this day.

The award was presented during the 17th Annual Forum of Going Global Strategy for Chinese Enterprises, a conference organized by WRSAEA that focuses on economic and green development cooperation between China and other countries.

“Negotiating a new era of trade between China and the United States heralded remarkable benefits for both nations,” said Barer. “I am honored to receive this recognition and am hopeful that the future of trade relations between these two nations will be even more fruitful.”

Founded in 1913, the Western Returned Scholars Association is a Chinese government-affiliated entity consisting of more than 40,000 Chinese scholars and researchers who have studied abroad.

Since its founding in 1966, GSB has provided results-oriented legal counsel to help clients – from established market leaders, to newly launched enterprises and governmental bodies – solve problems, create new opportunities and mitigate risk. The firm takes a holistic approach to managing clients’ needs, with attorneys who possess deep industry experience and a thorough understanding of current and emerging issues. GSB has offices in Seattle, Portland, Washington, D.C., New York, and Beijing. More information is available on the web at www.gsblaw.com.