Since the 2013 Hospitality Law Conference, we have received many requests for the Garvey Schubert Barer presentations.  Well, here they are.  Roger, Ruth and I are happy to further explain them and other details on the trending topics. Please give us a call or email.  It was a fun and educational conference so it is nice to look back at these slides! 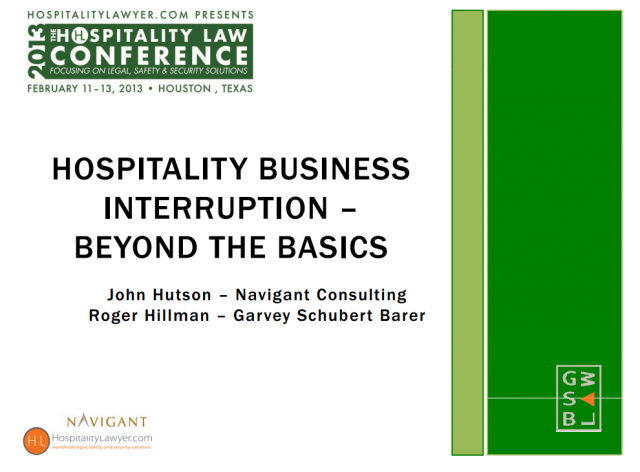 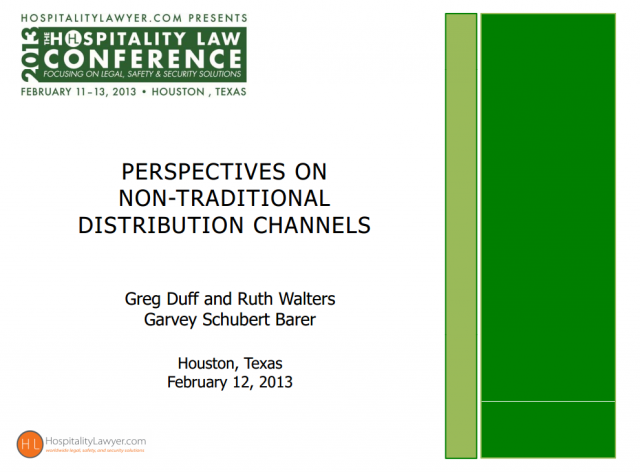 Over the last two weeks, Harold McCombs, leader of Garvey Schubert Barer’s Washington D.C.-based Telecommunications Practice Group, provided the first and second installments of his 3-part series on digital signage, its use in the hospitality and travel industries and the legal issues most often associated with it.  This week, Harold offers his third and final installment . . .

Digital signs are still signs, and placement of signs – especially billboards – has long been an issue receiving the attention of local governments.  If those signs are emitting light and displaying motion, there may be even greater concern about their placement and their potential nuisance value.  The Federal Highway Administration allowed digital billboards in 2007, concluding that they did not pose a danger to drivers.  However, the FHWA has been studying the research and working on a report, which is anticipated this year, focusing on whether or not electronic billboards can be a dangerous distraction for drivers because they are so much more dramatic than conventional billboards.  Furthermore, as digital signs proliferate, they will likely be scrutinized more closely under federal, state and local historic preservation and environmental impact laws.

By Greg Duff on 2.21.11 Posted in Conference Notes

Earlier this month, Stephen Barth and Hospitalitylawyer.com hosted the most recent installment of their successful hospitality law conference held each February in Houston.  This year’s conference saw attendance return to pre-recession levels with representation from many of the in-house legal departments of the largest national and international hotel operators.  The conference dedicated the first day to three all-day pre-conference boot camps on real estate, privacy / PCI compliance and the unique issues faced by the restaurant and lodging in-house lawyer.  I sat through the real estate presentations, which although a little slow at times (you can only define REVPAR so many times), did a reasonable job of summarizing the variety of issues associated with the development, purchase, sale and management of hospitality properties in one coherent presentation.  Ruth sat through the privacy / PCI discussion and found it very informative.  The second day was filled with a wide variety of topics – from alcohol compliance, to sweepstakes, to franchise negotiations, to receiverships to tips – in one of four breakouts dedicated to food & beverage, lodging, human resources and loss prevention.  The highlight of the third and final day was the annual hospitality case update.

By Greg Duff on 1.20.11 Posted in Uncategorized

Happy New Year (belated)!  The new year means new opportunities, and in the Hospitality industry that means it’s events time! The calendar of upcoming events is varied, but here are a couple that I plan to attend:

ALIS (America’s Lodging Investment Summit): I will be attending this San Diego event, January 24 through 26. According to the website, ALIS is the “leading and largest hotel investment conference in the world, attracting more than 7,000 delegates from around the globe over the past three years.” If you plan to attend, and you’d like to get together, please email me.

2011 Hospitality Law Conference: Held at the Omni Houston Hotel in Houston, Texas, this event covers the latest trends and issues in hospitality law. This year, I’ll be speaking at the conference on the topic of distribution. I would love to meet up with you in Houston; just send me an email and let’s get together.

Of course, I’ll be providing updates and a thorough follow up after each conference. If there is a topic to be covered at either of these events that you’d like particularly to hear about, please let me know and I’ll do my best to cover it.

By Diana Shukis on 11.30.10 Posted in Uncategorized

In this week’s “late due to Snowmageddon II” post, Diana Shukis, a partner in our Employment law practice group and long-time member of our Hospitality team, discusses the basic elements necessary to minimize your organization’s risk of harassment in the workplace, including a step-by-step approach to avoiding, and what to do in the event it occurs. Of course, the easiest way to ensure you have all the training and assistance you need is to give Diana a call.

Workplace harassment continues to be a serious concern because of its negative business impacts and serious liability risks for employers in all industries, including those in the hospitality community. It is vital for hotel managers and human resources professionals to review their organizations’ policies and practices regarding harassment and make any necessary improvements to avoid negative impacts. Workplace harassment based on race, ethnicity, disability or the perception of disability, sex, sexual orientation (in Washington and some other states), religion or age is prohibited by law.

Given the number of questions I've received recently from clients who've heard rumors about tip pooling becoming legal, I thought it time to update everyone. The short answer is (at least for now) that employers in Washington and Oregon may initiate mandatory tip pools under certain circumstances.

By Michael Brunet on 10.29.10 Posted in Employment Law

Mike Brunet is an associate working closely with Diana Shukis in our Employment Law Practice Group.  Both Mike and Diana do a lot of work with our hospitality clients in the areas of personnel and management issues - from creating and implementing comprehensive policies and procedures to providing key, timely advice during volatile workplace situations.  Today, Mike tackles the hot topic of employee social networking, from an employer’s perspective: