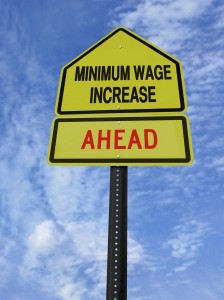 In a 43-page ruling issued late Tuesday, Federal Judge Richard Jones denied the International Franchise Association’s (“IFA”) bid to prevent Seattle’s Minimum Wage Ordinance’s franchise provision from going into effect as written. As a result, starting April 1, most franchisees in Seattle will be treated as “large” employers under the Ordinance, meaning they must pay the higher initial rate of $11 per hour. They also will scale up to the $15 minimum wage in just three years, much more rapidly than small businesses. While this is not the end of IFA’s case attacking the franchise provision, it is a big setback and a strong indication that IFA is unlikely to ultimately be successful.

IFA had sought a preliminary injunction, challenging the Ordinance’s definition of “large” employers as including all franchisees that are part of a chain with more than 500 employees anywhere in the nation. It argued that franchisees are more like small businesses, because individual locations are separately owned and have far fewer than 500 employees. It argued that, by lumping small franchise owners together with large businesses, Seattle was putting franchisees at a competitive disadvantage. It further alleged the City had intentionally discriminated against franchisees because of its preference for local businesses. This discrimination, if proved, would be a problem because states and cities are not allowed to enact legislation that is intended to or has the effect of favoring local businesses over out-of-state businesses. IFA’s motion, if granted, would have put a temporary hold on the franchise portion of the Ordinance and required that franchisees with fewer than 500 employees be treated as small businesses until the case was fully resolved, which could take until the end of this year. The Court heard three hours of oral argument on the motion last week.

The Court’s Order rejected each of IFA’s legal theories. In sum, the Court found:

Overall, the Court found IFA did not prove it was likely to win on any of its arguments. Although it was “sympathetic to the concerns of franchisees,” it also found that any harm from the Ordinance taking effect was speculative and not supported by the evidence. It also balanced the harm to franchisees against the “concrete harm” to low-wage employees if they lost the expected wage increase and found the equities did not support the requested injunction. Finally, in a serious blow to IFA’s chances at ultimate success in this case, assuming it goes forward, the Court found IFA had failed to raise “serious questions” showing it had a “fair chance of success on the merits.”

Although this ruling is not the end of the case, Judge Jones’ thoughtful and comprehensive analysis of IFA’s claims is a strong indication that IFA will not ultimately be successful while the lawsuit is before Judge Jones. If you have any questions on this ruling, the IFA litigation, or Seattle’s Minimum Wage Ordinance in general, please contact Greg Duff or Diana Shukis.