We often hear about Tommy John surgery for baseball players, and it may be becoming more commonplace.  For example, several pitchers for the New York Yankees have undergone the procedure in recent years.  In general, Tommy John surgery is a medical procedure to repair a torn ulnar collateral ligament (UCL) in the medial elbow.  Before the procedure was developed, the injury was considered career-ending. These days, talented pitchers who undergo the surgery often become top flight pitchers once again.

As the surgery has become more commonplace, so too have patents and patent applications referencing the surgery or the injury it was designed to treat.  Various types of businesses have been able to identify opportunities related to UCL tears and surgical repair of the injury, many of which are ancillary to the surgery.

An example of such an ancillary device is a pending application (published as U.S. Patent Publication No. 2013/0296757) directed to an orthosis for movement damping, presumably to stabilize the elbow area post surgery.

Another pending application (U.S. Patent Publication No. 2014/0171227) is directed to a device to be used in training, presumably to avoid stress on the UCL.

Other applications are even more attenuated, such as those directed to information systems that reflect attributes of athletes who have undergone Tommy John surgery for correlative purposes.  One issued patent (U.S. Patent No. 8,622,797) is even directed to a system and method for recommending fantasy league rosters, and encompasses Tommy John patient information (“beneficial medical procedure” considered in the “Analyzing Component” below) in the recommendation process. 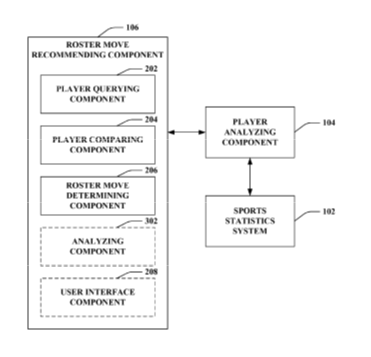 In each of these applications, inventors have identified potentially novel, inventive areas and business opportunities that have spawned from an athletic injury and have filed, and in at least some cases, been granted, patents for their inventions.  As medical resolutions to potential career ending injuries have evolved, so too have inventors capitalized on prevention, resolution, and use of data associated with such injuries and resolutions.