By Joshua Bloomgarden on 7.22.21 Posted in Sports & Entertainment Spotlight
PDF 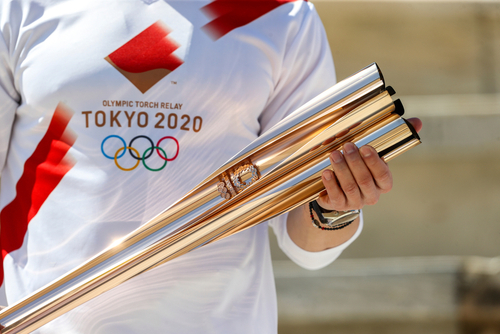 Strange as it may be, with vast majority of the world still reeling from the COVID-19 pandemic, we are on the eve of the opening ceremony for the “2020” Tokyo Summer Olympics. Olympic games in “normal” times are logistical feats involving tons of preparation and organization. Pair that with the challenge of trying to prevent a full-blown outbreak of COVID-19 (and potential losses in the tens-of-billion-dollars range) in a densely populated country seeing a new surge of cases, and you have Olympic officials in dire need of Japanese whisky. While these Olympics will be held without the usual crowds in attendance, making for another eerie sight (unless you’re used to watching Mets games), the risks of holding the Games still remain high. Hopefully, the Games go on without a hitch and will highlight their virtues of human resiliency and cooperation on the global stage, but I, like many others, cannot help but wonder about the further propagation of this virus, and whether we would be better served to stay on the sidelines just a little longer. Besides, I generally favor spotlights over torches.

…Which reminds me, it’s time to dive in to the Spotlight for this week:

Right Now, It’s Olympics for 17-Year-Old Skateboarder Brighton Zeuner. Next? Fashion Design School
July 20, 2021 via Forbes – Business (subscription may be required)
Team USA teen Brighton Zeuner is about to introduce herself to the world as one of the three U.S. women’s park skateboarders who will show the world what they can do on a board in Tokyo — and, hopefully, come home with an Olympic medal. But Zeuner has also embraced the opportunity to express herself on a skateboard — especially when combined with her love of fashion.

Are Olympic Athletes Taxed on their Winnings?
July 20, 2021 via Yahoo Finance - Top Stories
Professional athletes earn money through sponsorships, endorsements, and prizes, all of which will be treated as income by the IRS.

One of China’s Biggest Stars, Kris Wu, Faces a #MeToo Storm
July 20, 2021 via New York Times - Most Recent (subscription may be required)
Several major luxury brands have severed ties with Kris Wu, a Chinese Canadian singer, with a huge following, after an 18-year-old accused him of targeting and pressuring her and other young women for sex.

Alex Morgan’s Net Worth Is Way Too Low for Her Stardom
July 19, 2021 via FanBuzz - Sports News
Alex Morgan is Messi famous, but she isn’t paid anywhere close to the level her status deserves.

What Is Chris Paul's Net Worth? Suns Star Was Second-Highest Paid Before Pandemic Reduction
July 19, 2021 via MEAWW
As per Celebrity Net Worth, Paul has a net worth of $130 million. Forbes reported that his 2020-21 salary, before a reduction for the pandemic, was tied for the second-highest in the NBA.

Mike Tyson’s Biggest Money Grabs Outside Boxing
July 18, 2021 via EssentiallySports
Under the umbrella of American promoter Don King, Mike Tyson became the biggest name in boxing through the 1990s. Within that decade, his net worth soared to $300-$400 million. Most of his earnings stemmed inside the ring; however, the youngest heavyweight champion also bagged several promotion deals and brand endorsement offers outside the realm of boxing.

NFL Star Saquon Barkley Becomes the Latest Celebrity to Accept Bitcoin Payments
July 17, 2021 via Coinnounce
Popular celebrities have been turning to adopt Bitcoin (BTC) over the last few months, and the latest to join is NFL star from New York Giants, Saquon Barkley. While appearing on "The Best Business Show," Barkley said that he will accept Bitcoin payments for all future marketing and endorsement deals.

Richard Sherman Net Worth: Contract, Endorsements, And Assets Of The NFL Star
July 16, 2021 via Washington Newsday
Richard Kevin Sherman is a free agent after being named to the Pro Football Hall of Fame five times. Since his debut in the NFL in 2011, the star athlete has played for a variety of clubs and signed a slew of rich endorsement deals.

'You Want to Get That Reassurance': Why Scottie Pippen, John Legend Are Endorsing Travel
July 14, 2021 via USA TODAY
George Clooney, John Legend and Scottie Pippen want you to travel. All three celebrities star in new campaigns tied to the travel industry: Clooney promotes a fundraiser that offers the chance to visit him in Italy; John Legend stars in a new Vrbo ad that promotes visiting loved ones; and Scottie Pippen offers up his own Chicago home through Airbnb.

NBC Revs Up Three-Year Renewal With IndyCar
July 20, 2021 via Sportico - Business (subscription may be required)
IndyCar has inked a three-year extension of its standing rights deal with NBC Sports, securing a new distribution agreement that will see a sharp uptick in the number of races that will air on the flagship broadcast network.

Disney Plans to Spread Sports Further Beyond ESPN
July 15, 2021 via Variety
An increasing amount of what ESPN does isn’t going to be seen on good ol’ ESPN. “Sunday Night Baseball” has been a mainstay of the Disney sports network since the show’s launch in 1990, but on August 8, the program will air on ESPN’s corporate cousin, ABC.

Apple TV+ Signs a Multi-year Feature Film Deal With Hyperobject
July 15, 2021 via AppleInsider
Adam McKay's Hyperobject Industries has signed a multi-year first-look film deal with Apple TV+. Rather than offer decades of back catalog for customers to wade through, Apple seeks out new and exclusive content deals with several studios.

Netflix Extends Deal For Animation Films With Universal Pictures
July 14, 2021 via GDN Online
Netflix Inc and Comcast Corp's Universal Pictures are extending a multi-year exclusive rights deal in the United States for animated film franchises such as "Minions" and "Puss in Boots," the streaming giant said on Tuesday, July 13.

Sony Music Sues Gymshark Over Songs in TikTok, Instagram Videos
July 16, 2021 via Bloomberg Law - Intellectual Property News (subscription may be required)
Sony Music Entertainment is alleging that a U.K.-based fitness brand has infringed on “hundreds” of its popular songs in social media videos, according to a complaint in a California federal court.

How Cryptocurrency Could Change the Way We Travel
July 19, 2021 via Travel + Leisure Magazine
The one-of-a-kind digital files known as non-fungible tokens upended the art world this year. Next up? The travel industry, which may soon use cryptocurrency-backed NFTs to quantify the value of our vacations.

‘Fantasy Hollywood’ — Crypto and Community-Owned Characters
July 15, 2021 via Media & Entertainment Services Alliance (MESA)
Today, crypto technologies like decentralized autonomous organizations and NFTs enable a new model of character development and ownership that could not only unbundle creative media, but also lower the barrier to entry for online communities to bring new characters into the world.

Sankey Joins Call for Change in College Athletics Oversight
July 20, 2021 via Alabama Daily News
Southeastern Conference Commissioner Greg Sankey echoed the NCAA president’s call for potential changes in how college athletics are governed Monday (July 19), though he did not endorse a breakaway by the five most powerful leagues.

Even as College Sports Evolve, Mark Emmert and the NCAA Need to Focus On Providing A First-Rate Education
July 16, 2021 via Forbes – Business (subscription may be required)
Mark Emmert gave an extended media interview last week during which he came up with the novel idea that maybe the NCAA should stop colluding around economic matters. Eureka, the NCAA is a cartel! Perhaps, he seemed to discover, it would be better to leave a lot of decisions up to the conferences and the schools or even to individual sports. But, dare one ask, how will this decentralized oversight of the perimeters of college athletics affect the education of the students who happen also to engage in the extracurricular activity of intercollegiate sport?

University of Wisconsin Wants to Educate Badgers Athletes on NIL, Not Oversee Contracts; Some Proposed Deals Raise Questions
July 16, 2021 via Madison News
UW has taken an educational approach toward players seeking out and signing contracts to capitalize on their right of publicity but added an oversight component. The NCAA has general guidelines — agreements can't be tied to a player attending a certain school and can't be rewards for athletic performance — and UW has more specific ones.

NCAA’s Emmert: It Is Time to Decentralize College Sports
July 15, 2021 via Los Angeles (LA) Daily News
NCAA president Mark Emmert said Thursday (July 15) the time is right to consider a decentralized and deregulated version of college sports, shifting power to conferences and campuses and reconsidering how schools are aligned.

A Scouting Report on the Fast-Moving and Chaotic Change of NIL
July 15, 2021 via Sportico – Law (subscription may be required)
The U.S. Supreme Court’s ruling in NCAA v. Alston and the rise of name, image and likeness combined to make June one of the most transformative months ever for college sports.