By Joshua Bloomgarden on 2.3.22 Posted in Sports & Entertainment Spotlight
PDF 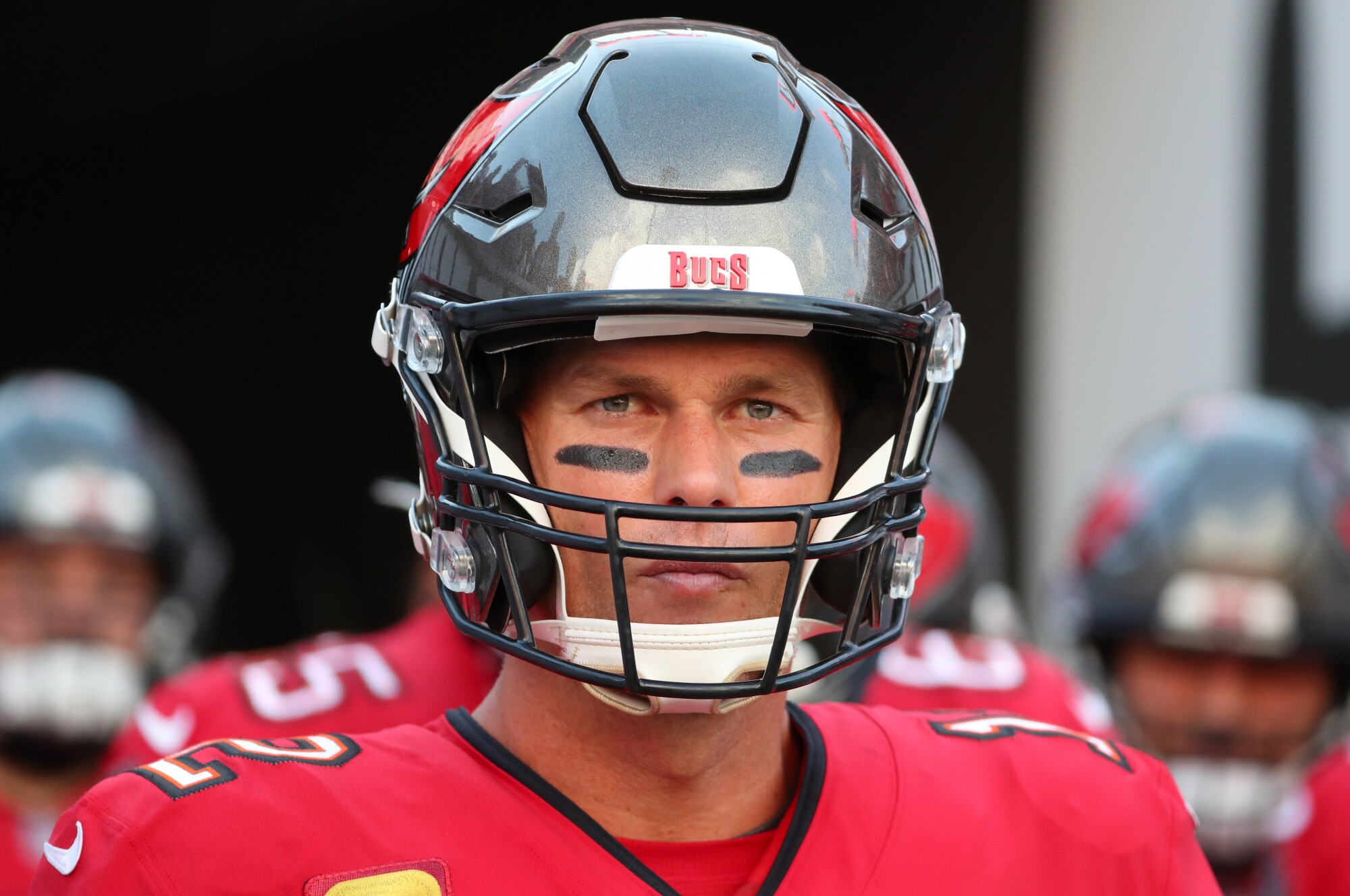 Welcome back to the Spotlight and oh-me, oh-my, do we have a full slate of developments in the National Football League (NFL) – and that’s to say nothing of what happened on the field, with the Cincinnati Bengals and Los Angeles Rams battling their way into Super Bowl LVI. First, seven-time Super Bowl champion (and two-time Super Bowl runner-up to my New York Football Giants) quarterback Tom Brady was reported to have retired, several days before his official announcement and the vesting of his $15 million signing bonus. While he could well afford to have done so, the all-time great was not about to leave that money on the table. A few days later, the Washington Football Team (formerly known as the Washington Red…actions) debut their new name and branding as the Washington Commanders, and at least so far, appear to have avoided the same plight that the Cleveland Guardians baseball team met when changing their name several months ago. Kudos to the Commanders’ trademark attorneys there. But overshadowing all of that was former Miami Dolphins’ head coach, Brian Flores, a Black man, filing a potential landmark lawsuit for himself and an uncertified class action against the NFL and several named member clubs (unfortunately including the aforementioned New York Football Giants) alleging, amongst other things, pervasive racial discrimination in the NFL’s hiring process – in spite of the NFL’s “Rooney Rule,” requiring teams to conduct interviews with minority coaching candidates. Time will tell how this case will shake out, what other details will be revealed (already we’ve learned about alleged payments to coaches for losing football games in an effort to improve NFL draft position,) and how much Flores will be able to bring about lasting change through this lawsuit. Rest assured, the “Spotlight” has you covered – but until then, check out what else is on tap this week:

Rafael Nadal Sets New Grand Slam Record With His Lucky $1 Million Richard Mille Rafa Watch
January 31, 2022 via Auto Evolution
It’s not uncommon for public figures, whether they’re artists or athletes, to partner with certain brands for publicity – and an extra buck in that person’s bank account. That said, tennis champ Rafael Nadal is a brand ambassador unlike most.

NIL Opportunities Growing for NAIA Student Athletes
January 26, 2022 via Forbes – Business (subscription may be required)
The National Association of Intercollegiate Athletics has formed a new partnership with Opendorse, the first-ever association-wide deal in college athletics. The three-year partnership will give NAIA athletes access to Opendorse’s NIL marketing, education and compliance platform.

Tom Brady May Be Retiring. Here’s How Much He’s Earned in His 22-Year NFL Career
January 29, 2022 via Forbes – Business (subscription may be required)
It could be over. ESPN’s Adam Schefter and Jeff Darlington reported on last Saturday afternoon, January 29, that Tom Brady was retiring from professional football.

LeBron James Foundation Joins Crypto.com in Web3 Education Drive
January 28, 2022 via Sportico – Business (subscription may be required)
After acquiring the naming rights to the Los Angeles Lakers’ home arena, Crypto.com is now headed to LeBron James’ other home. The cryptocurrency exchange company has partnered with the LeBron James Family Foundation to add Web3 education to the foundation’s I Promise program in Akron, Ohio.

Beijing Olympics Highlights U.S. government and Corporations Divide Over China
January 27, 2022 via Intellasia - China News (subscription may be required)
The Beijing Olympics kick off next week under a cloud of controversy, with six countries including the U.S. announcing diplomatic boycotts over China’s human rights abuses.

Beijing Games Offer NBCU Challenges, ‘Unprecedented Opportunity’
January 27, 2022 via Sportico – Business (subscription may be required)
NBCUniversal is about to begin broadcasting the second half of a rare Olympics doubleheader — and, as Variety reports, fatigue has set in. The Winter Games in Beijing begin February 4, just six months after the close of the Tokyo Summer Olympic Games that were postponed from 2020 because of the pandemic.

Joe Rogan Isn’t Spotify’s Only Podcast Problem
January 31, 2022 via Bloomberg – News (subscription may be required)
Spotify Chief Executive Office Daniel Ek is trying to extinguish a raging controversy that began a week ago, when singer Neil Young demanded his music be removed from the platform over concerns that its most popular podcaster, Joe Rogan, is spreading vaccine misinformation.

Neil Young's Radio Channel on SiriusXM is Revived After Spotify Removal
January 27, 2022 via Wall Street Journal Technology (subscription may be required)
As Neil Young’s music was coming down from the world’s largest streaming service, satellite-radio company SiriusXM went to him to strike a deal. SiriusXM, a unit of Liberty Media Corp., announced the return of “Neil Young Radio,” a satellite and streamed channel featuring Mr. Young.

Neil Young's Ultimatum to Spotify Shows Streaming Platforms Are Now a Battleground Where Artists Can Leverage Power
January 26, 2022 via News Break - Top Stories
Neil Young has given Spotify an ultimatum: remove the Joe Rogan Experience podcast or Neil Young walks. In a letter to his management team and label, the 79-year-old rocker lambasted Spotify for spreading Rogan's misinformation about COVID vaccinations.

Comedian Leanne Morgan Signs With UTA
January 26, 2022 via News Break - Top Stories
Nashville based stand-up comedian and actress Leanne Morgan has inked with UTA for worldwide representation in all areas.

ESPN Extends PFL Deal
January 25, 2022 via News Break - Top Stories
The Professional Fighters League (PFL) and ESPN have announced a new, multi-year media rights agreement that will see expanded coverage on ESPN linear networks and ESPN+ in the US.

Coachella Jumps Into NFT Trend, Teams Up With FTX for Concert Passes
February 1, 2022 via Yahoo Finance - Top Stories
Music festival Coachella and cryptocurrency exchange FTX are teaming up to offer ten lifetime festival guest passes as NFTs, underscoring how the music industry is using digital collectibles to enhance the concert going experience, while offering a glimpse into the future of live events.

Kanye West Explains Why He Won’t Make NFTs, for Now
February 1, 2022 via Bloomberg – News (subscription may be required)
Kanye West says he won’t be cashing in on the NFT craze, unlike other celebrities and musicians. But because it’s Kanye, he left the door open to changing his mind.

NFTs, Celebrities and Perverse Deal-Making
January 31, 2022 via Yahoo Finance - Top Stories
Early last week, a viral clip from “The Tonight Show Starring Jimmy Fallon” began making the rounds on social media. In it, Fallon’s guest, the socialite turned crypto promoter Paris Hilton, shows off a picture of one of her recent NFT purchases: a reddish Bored Ape complete with hat and sunglasses.

Warner Music Strikes Deal With OneOf for Artist and Music NFTs
January 31, 2022 via Greenwich Time
Jem Aswad provided by OneOf has formed a preferred partnership with Warner Music Group that will see the company create exclusive NFTs for a range of artists across WMG's catalog of music.