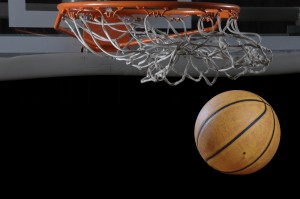 Sports gear is constantly being improved. Athletes and others, such as trainers, spend a considerable amount of time with equipment and are often the sources of new ideas and gear. But with the advent of smart phones, casual athletes can envision new services related to sports, and one of these ideas recently resulted in a granted patent.

United States Patent No. 8,845,460 was granted to Jacob Feldstein, a high school student and an occasional basketball player with a good idea. The patent is directed to both a system and a device for delivering a basketball to a player once a basket is made. When practicing shots by himself, he became aware of a device, which attaches to a basketball rim and acts like a chute to send the ball back toward a defined position after a made basket. Being familiar with GPS technology in a smart phone, Jacob realized that the technology can be used to locate the player – more precisely, calculate where the player will be – and received patent protection for a modified chute where the chute is redirected to delivering the ball to the location of the player is moving to. That is, the system and the device include the ability to track the player and determine that the player is “on the move.” It can also determine where to deliver the ball so that it arrives at the spot where the player is moving next. By delivering the ball to the location of the player, a player can take more shots from different locations in less time than before the invention, and the player can better replicate pass-and-shoot situations.