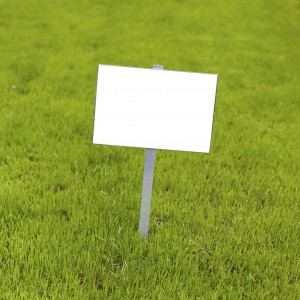 Reed v. Town of Gilbert, No 13­502, June 18, 2015, involved one of 25 exemptions to Respondent's general requirement that a sign permit be secured to display a sign. Those exemptions are based on the content of the sign. The category at issue was a "temporary directional sign relating to a qualified event," which may be sponsored by a religious, charitable or other nonprofit organization. Signs in this category are limited in size (6 square feet), the number which may be placed on property (4), and time (12 hours before and one hour after the event). Those signs are treated less favorably than ideological signs ( which may be 20 square feet, allowed in any zone and unlimited in time) and political signs (which may be 16 to 32 square feet, depending on the status of the property, and allowed 60 days before and 15 days following an election).

Reed, a church pastor, wished to advertise the times and location of his congregation's service, which were not always in the same place, since there was no fixed church site. The signs did not always contain a date and were in place outside the time limits of the regulations. After accommodation failed, Reed filed a First Amendment claim in federal court. After two rounds in the trial court and Ninth Circuit, relief was denied as the categories were deemed content neutral so that no content based regulation occurred. The Supreme Court granted certiorari.

Justice Thomas, writing for the court, said that content based regulations of expression were presumptively unconstitutional and would only be upheld if shown to serve a compelling public interest and narrowly tailored to achieve the same. He added that "content ­based" dealt with either the topic discussed or idea the message expressed. Even content neutral regulations would be subject to strict scrutiny if they cannot be justified without reference to the content of the speech or shown to be adopted due to disagreement with the message conveyed.

The Court found the regulations content based as they depended on the message i.e. a "qualifying event," an ideological matter, an election) which triggered different regulations for each category, thus triggering the strict scrutiny analysis. The Court found the justifications accepted by the Ninth Circuit "unpersuasive."

One justification was that the regulations were not motivated by disagreement with the message? However the Court responded that motivation is irrelevant if the regulations were not content neutral, even if the regulation were facially neutral. Such a regulation may be content ­based even if it does not discriminate based on subject matter or viewpoints. In this case the regulations single out specific subject matter (information on "qualified events), even if it takes no position on those events, and allows signs relating to that event to be treated differently than ideological or political signs ­­ a paradigmatic example of content ­based discrimination." Another justo action was that the regulations were content ­neutral as to speaker and event. The Court said the signs were based on their content, rather than the identity of the speaker. Had the church or its pastor expressed an ideological message or supported a candidate, the regulations would have been different. Thus they are content based. There was no adequate justification for these regulations under a strict scrutiny analysis.

Respondent offered traffic safety and aesthetics, but the Court found the regulations "hopelessly under-inclusive" as they did not deal with other signs causing similar effects, as they allied an unlimited (in time) posting of ideological signs and a multitude of political signs at election time.

The Court asserted that the public had ample content ­neutral means to deal with aesthetics and traffic safety ­­ by dimensional and physical limitations, for example and suggesting the world would not end if more signs resulted from litigation. The Court also stated that some traffic safety signs may survive strict scrutiny? However that issue was not before it and the differing regulations on ideological, political and qualifying event signs were content ­based and did not survive strict scrutiny. The Ninth Circuit decision was thus reversed and remanded.

Justice Breyer concurred in the judgment, sounding caution in the formulaic use of strict scrutiny in every content based sign code distinction. While that analysts is helpful when a public forum or viewpoint discrimination is involved, government programs almost always involve content discrimination, such as securities regulation, drug or energy ­conservation labeling, reporting of child abuse or comic able diseases and the like, many of which do not involve commercial matters. While he rejects watering down the strict scrutiny test, Justice Breyer suggests it be a "rule of thumb" in most cases outside the public forum or viewpoint discrimination areas to examine whether the regulation is disproportionate to First Amendment interests in light of regulatory objectives. Such an approach would allow regulation of speech by voters where courts "should hesitate to substitute judicial judgment for that of administrators." In any event, Justice Breyer joined Justice Kagan's concurrence in the Court's judgment.

Justice Kagan's, joined by Justices Breyer and Ginsburg, concurred in the judgment, pointing out that numerous local sign codes exempt or permit various sign categories ­­ "pedestrian crossing" or "George Washington Slept Here" being examples, which codes are now seen as content based and subject to strict scrutiny. She asked rhetorically whether a town had a compelling state interest to say "George Washington Slept Here?" Justice Kagan's found the traditional justifications for strict scrutiny may not apply in such low ­level situations, as they do not interfere with the marketplace of ideas or impose viewpoint or subject matter limitations on speech. If those concerns are not present and the risk is inconsequential, strict scrutiny is unwarranted and sweeps too broadly than the actual harm to free speech interests. Justice Kagan suggested the court exercise common sense, leaving intact laws that do not violate these interests. She noted that in Members of the City Council v. Vincent, 466 U.S. 789 (1984) and more recently in City of Ladue v. Gilleo, 512 U.S. 43 (1994), the Court passed over such distinctions and in City of Renton v. Playtime Theatres, 475 U.S. 41, 46 (1986), the Court used intermediate scrutiny to deal with distinctions between adult and other films shown by a movie house. Justice Kagan suggested using Ladue here, under which the Gilbert code would. To pass strict or intermediate scrutiny ("or even the laugh test") as there was no coherent justification for the distinctions made. There was no reason to apply strict scrutiny here and the Court risks becoming the "Supreme Board of Sign Review" without any necessary First Amendment justification.

Justice Kagan's concerns are certainly justified. In the light of this decision, what is the justification for distinguishing between commercial and noncommercial signs or between onsite and offsite signs? One must read the content of the sign to make such regulatory decisions if regulation is to be done at all. The principal opinion suggests that traffic signs "may" survive strict scrutiny, but what if the multitude of other public or private signs that are not traffic related? Perhaps Summum will allow the public to use its proprietary and regulatory powers to deal with some signs, but that response is insufficient to deal with the host of sign issues facing local governments today. Let us hope we will not have wait another twenty years for answers from a Sphinx­like high court.