Have you ever seen the iconic advertisements on the side of the Hotel Figueroa in Los Angeles? I bet you have - if not on a commute opportunity through the metropolis, then in a movie. Or, perhaps your business is similar to th

e Pier House 60, Clearwater Beach Marina Hotel where a condition of approval required compliance with both the public art requirements for the development and the local sign code. If you are interested in how to avoid an eight-armed strangle on your business’ commercial speech, read on for guidance about how to avoid problems with local sign regulations.

The Washington Court of Appeals in Catsiff v. McCarty, 167 Wash App 698, 274 P3d 1063 (2012), issued a broad decision regulating commercial speech on signage. If you own a business that is on the lookout for name recognition and the perfect location for the right type of sign, you should consider this case of the Inland Octopus toy store. Catsiff, the owner of a toy store in Walla Walla, decided to paint a wall sign depicting an octopus hiding behind a rainbow over the rear entrance of the store. He did not obtain a permit. Later that year, he painted on the store front an octopus hiding behind several buildings with a rainbow over the buildings. Again, he installed the front entrance sign without obtaining a permit. The City of Walla Walla took code enforcement action against Catsiff for violating the sign code. In response, Catsiff admitted to the facts constituting the violation – exceeding the height limitations and not obtaining a permit to ensure compliance with the downtown design standards, but took umbrage to the overall sign code and countered that the regulations were unconstitutional.

The court reviewed Catsiff’s free speech rights under the state and federal constitutions. The court concluded that the two octopus signs were commercial speech and were placed as an expression related solely to the economic interests o 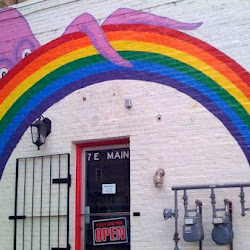 f the speaker and audience because their design matched the store’s logo and Catsiff intended to invite people into his store to purchase toys through the advertisement. The court found that the city reasonably exercised its police powers through the adoption of its sign ordinance because such regulation of commercial speech, where the city was concerned about the obstruction of views and distraction to motorists legitimately call for regulation. The court found that the city’s size and design standards were content neutral and that all downtown businesses were subject to the same set of standards.

Similarly, Oregon’s Supreme Court upholds proper time, place and manner regulation of signs as discussed in Outdoor Media Dimensions, Inc. v. Department of Transportation, 340 Or 275, 132 P3d 5 (2006). In that case Outdoor Media Dimensions, Inc. had displayed several outdoor advertising signs without a permit in violation of the Oregon Motorist Information Act (1999) (“OMIA”). The media company, like Catsiff, challenged the citations on several state and federal constitutional grounds. The court concluded that size limits on signs are permissible time, place, and manner restrictions because such regulations are unrelated to the substance of any particular message. However, the court did rule that the OMIA impermissibly required a fee for off-premises signs while exempting on-premises signs from the fee requirement. The court ruled that the on-premises/off-premises distinction is not content neutral because that distinction allows a sign owner without a permit to display one narrowly defined category of message - a message related to activity conducted on the premises where the sign is located - but not to display any message respecting any other subject. Further, the court refused to accept that the state’s reliance on legitimate safety and aesthetic goals of the OMIA justified a prohibition of speech based on content. Therefore, the court concluded that the fee structure based on the type of expression is an impermissible restriction on the subject of expression under the state constitution.