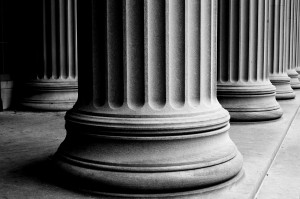 As the Oregon Legislative session moves into full-swing giving spectators a front row seat to frantic lobbying and frenetic lawmaking, the Oregon Court of Appeals issued a decision that should remind those involved in this pastime affectionately known as “sausage-making,” to consider the importance of the deliberations.  The decision relates to efforts to remove the oldest home in Lake Oswego, the historic Carman House, from the City of Lake Oswego’s inventory of historic resources and potentially allow for its demolition, as described in my previous blog post.  In 1995, the Oregon Legislature passed the statute at issue, ORS 197.772, which precludes a local government from imposing a historic designation on a property over “a property owner’s” objection.  Subsection (3) of that same statute further provides that “a property owner” may subsequently seek to remove a historic designation that was imposed.  The issue before LUBA and the Court in the case, Lake Oswego Preservation Society v. City of Lake Oswego, was whether a request to remove a designation after it has been imposed must be made by the same property owner who originally objected or whether a subsequent owner may also seek removal.

The general rule when interpreting a statute is to focus on the text and context of the provision.  However, courts will also look to the legislative history to determine intent.  In the Lake Oswego case, the Court found, as had LUBA, that the text and context for determining who was included as “a property owner” under ORS 197.772 was not particularly helpful and it turned to the legislative history.  This history came largely from two hearings before the House Committee on General Government and Regulatory Reform.  LUBA keyed into a statement by one of the bill’s authors, when asked whether a subsequent purchaser could seek to remove historic designation, responded that “[w]e haven't thought about that situation.”  LUBA also noted that a proposed amendment making clear that in cases where the property owner does not object, subsequent owners are bound to the designation, and was rejected and not included in the engrossed bill.  Based on those comments, LUBA concluded that the drafters intended to afford relief only to those property owners on whose property the designation had been imposed.

The Court of Appeals analysis of the legislative history makes no mention of those portions of the legislative history that LUBA found important.  Instead, the court highlighted that the legislation was to allow owners that were “coerced into the historic property designation” to seek removal of that designation.  The court quoted from another representative summarizing the scope of subsection (3) to include those cases where “property owners were not allowed to consent and government imposed it on them that now they would have an opportunity to remove their property from that designation.”  From this, the court concluded that the amendment allows “individuals who own property on which historic designations had been involuntarily imposed by the local government – before the enactment of ORS 197.772 – to have that designation removed.”  The court explained that the focus during these committee meetings was on providing relief in cases where a designation was imposed over an owner’s objection and not on whether subsequent purchasers could also take advantage of the previous owner’s objection.  Further, the court found that preservation advocates’ concerns that adoption of subsection (3) would have the effect of “dismantling historic districts” and a lack of response by the proponents indicated an intent to have broad effects.  As a result, the court concluded that any property owner that has a local historic designation forced on their property may remove that designation.

What is so interesting about this case is that two review bodies looked at the same legislative history and reached diametrically opposing conclusions.  Maybe the difficulty is that the Court of Appeals failed to mention, much less explain, why the comments that LUBA found instructive were not helpful.  How could the court find that committee discussions focused solely on giving relief to those owners who were “coerced into a historic preservation designation” and from that extend that same protection to property owners who were not coerced but instead knowingly purchased a designated property?  If this ruling rests on the conclusion that the legislature intended the effect of ORS 197.772 to “dismantle” historic preservation efforts, legislators, both proponents and opponents, need to be much more descriptive and particular in describing their intent.

The City of Portland Bureaus of Development Services and Sustainable Development proposed a series of incentives for the development of green energy technologies or “green bundle” within the City back in July of 2009.  This “green bundle” was part of a number of other technical amendments to the City Zoning Code known as RICAP 5.  The green amendments included exempting eco-roofs from design review, setting standards for the location of water cisterns and wind turbines and exempting roof-mounted solar panels from design review in non-historic areas.