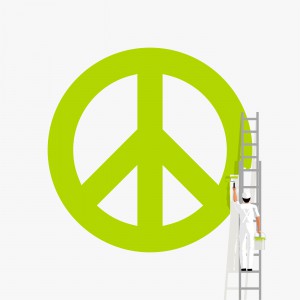 Vosse v. City of New York, 2015 WL 7280226 (S.D.N.Y.) was a First Amendment suit by an apartment dweller against the City and its Building Commissioner over an illuminated peace symbol on the exterior of Plaintiff’s 17th floor apartment. Illuminated signs were prohibited more than 40 feet from the ground in the applicable zoning district, but the regulations made an exception for “flags, banners or pennants” on certain religious, philanthropic or community structures. Plaintiff contended the regulation was content-based and thus unconstitutional. The trial court granted summary judgment, finding that Plaintiff lacked standing. The Second Circuit first affirmed, then reconsidered the case in the light of Plaintiff’s alternative argument that assumed standing for an alternative contention that, even if content-neutral, the regulation was not a reasonable time, place and manner restriction.

The trial court focused upon the regulation without regard to any regulation of content.  The City’s interest in the regulation was preservation of neighborhood character and an aesthetically pleasing landscape, avoiding “mini Times Squares.” Such a regulation to improve the quality of urban life is given “high respect” by the courts, especially with regard to signs that pose “distinctive problems” in that regard. The court noted that not all signs were prohibited above the 40-foot level in the subject zone, but non-illuminated signs with non-commercial copy and not exceeding 12 square feet, were permitted, concluding that the regulation was narrowly tailored to serve that interest and did not burden more speech than necessary to do so.

It may be that another regulation would also serve those interests; however “narrow tailoring” does not equate to the least restrictive measure, but only that the regulation not burden substantially more speech than necessary to further the identified governmental interest. The court added the City’s approach was reasonable and did not require it to distinguish between degrees and methods of illumination that may be impractical and less effective. The fact that all non-commercial messages are permitted, subject to general regulations on the form and size of the message allows for alternative methods of communication and is thus consistent with the First Amendment. Plaintiff is not entitled to a sign that has the same visual impact as the one prohibited by the local regulations. The trial court thus dismissed the complaint.

The regulations in this case were more accommodating of free speech interests than the ones struck down in City of LaDue v. Gilleo, 512 U.S. 43, 48 (1994), as the Defendant had provided for adequate alternative channels for expression and did not limit signage to residence identification, and “for sale” and safety signs. Taken as a whole, the challenged regulations were thus reasonable time, place and manner restrictions under the Federal Constitution.