By Paul Trinchero on 8.5.16 Posted in Easements
PDF 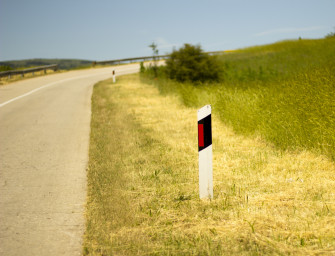 It is well established that a plat is generally sufficient to establish an express easement if it describes and depicts a roadway or trail sufficiently to reflect the intention to create an easement. Bloomfield v. Weakland, 224 Or App 433, 445-48 (2008), rev den, 346 Or 115 (2009).  In cases where a plat is insufficient to establish the intent to create an express easement, an easement may nevertheless be implied. In the typical case, an implied easement is not reflected in a deed or plat. Rather, it arises as an inference of the intention of the parties based on the circumstances existing at the time the land was divided and conveyed.  In those circumstances, the trial court applies the eight factor test established in Cheney v. Mueller, 259 Or 108, 118-19 (1971) to determine whether implied easement exists.  In Dayton v. Jordan, the Court of Appeals addressed the question of whether the trial court may short cut the Cheney test by implying an easement based almost exclusively on the depiction of the purported easement on the plat.  The Court of Appeals determined that the eight factor Cheney case must always be applied to establish an implied easement – even where the purported easement is depicted in a plat.

The dispute in Dayton was between two neighbors operating competing ATV rental businesses near the Oregon Dunes National Recreational Area. The two parcels were once part of a single parcel of land, which was the beneficiary of a 1990 roadway easement over the property to the west allowing access to the Oregon Dunes National Recreational Area (“1990 Easement”). The original parcel was bisected by a roadway connecting the 1990 Easement to Highway 101 located east of the property. In 1999, the prior owner partitioned the property into two parcels creating the southern parcel now owned by the defendants. The roadway connecting Highway 101 to the beach served as the northern boundary line of the two parcels, but no part of the roadway was on defendants’ parcel. The partition plat did not expressly identify the roadway as an easement, nor was any deeded easement granted in favor of defendants’ parcel. However, the deed conveying the defendants’ parcel referenced the partition plat depicting the roadway.

In 2005, the northern parcel was further subdivided, creating the parcel owned by plaintiffs. The roadway was located on plaintiffs’ parcel and an easement in the roadway favor of the other northern parcels was expressly reserved in the subdivision plat recorded in 2005. The litigation arose out of the parties’ dispute over the defendants’ right to use the roadway over plaintiffs’ parcel for their ATV rental business. Plaintiffs filed a complaint seeking to exclude defendants from the roadway. Defendants raised two counterclaims seeking to establish an easement over the roadway. Defendant’s first counterclaim (which is the subject of this appellate opinion) was that the easement over the roadway was implied by reference to the 1999 plat. Defendants’ second counterclaim argued that the easement can be implied from the use of the roadway prior to the 1999 partition (and is the subject of a separate appeal).

Defendants filed for summary judgment on the first counterclaim, contending that an implied easement can be created by reference to the partition plat depicting an easement – even if the easement is not specifically identified as an easement on the plat.  Defendants reasoned that the circumstances surrounding the 1999 plat indicated that the disputed “road was placed on the plat for a reason.” Plaintiffs argued that the trial court was required to apply the eight factor Cheney test before it could determine whether an implied easement exists. Relying on a line of Oregon Supreme Court cases, defendants countered that reference to a plat alone was enough to imply an easement. The trial court agreed with defendants and granted summary judgment.

The Court of Appeals reversed. While the Court agreed that under appropriate circumstances a plat can give rise to either an express or implied easement, the Court disagreed that an implied easement could be created without first applying the eight factor Cheney test. In doing so, the Court distinguished the line of cases cited by defendants – most having to do with implied public dedications – and stuck to its prior cases finding that the Cheney factor should be applied in all implied easement cases. The Court of Appeals held that the trial court erred in failing to consider and apply the eight factor Cheney test in concluding that an implied easement existed. The case clarifies that there are no short cuts to establishing the existence of an implied easement – even one depicted on a plat. Practitioners should be sure to address all the Cheney factors and supply evidence (or establish the lack thereof) for each factor.