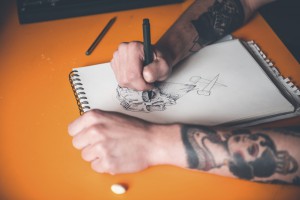 Buehrle v. City of Key West, 813 F3d 973 (11th Cir., 2015) was a challenge to Defendant’s ordinance limiting the number of tattoo parlors in its historic district.  When Plaintiff challenged the ordinance in state court, Defendant removed the case to federal court.  On cross motions for summary judgment the trial court accepted Plaintiff’s contention that tattooing was protected First Amendment expression, but  also found the ordinance to be a reasonable time, place and manner restriction.

The Eleventh Circuit did not dwell on the form of artistry and declared tattooing to be a form of expression protected by the First Amendment and rejected the City’s proffered distinction between a tattoo and tattooing itself, stating that the First Amendment protects the creative artistry of the producer as well as the art itself, concluding:

Mr. Buehrle and his work appear to be of this ilk [i.e., creative expression], and we see no meaningful basis on which to distinguish his work from that of any other artist practicing in a visual medium, certainly not a basis sufficient to deny him First Amendment protection.

Having found the expression was protected by the First Amendment, the court determined it may only regulate the same if the regulation “(1) is justified without reference to the content of the regulated speech, (2) is narrowly tailored to serve a significant governmental interest, and(3) leaves open ample alternative channels for communication of the information.”  Ward v. Rock Against Racism, 491 U.S. 781, 791 (1989).  The parties agreed the ordinance was content-neutral and the court turned to the issue of whether it served a significant governmental interest.  While preservation of the historic area was a substantial governmental interest, there must be a reasonable basis to demonstrate that such interest is being advanced and is not a cover to restrict expression, rather than its secondary effects, concluding Defendant failed to meet its burden.  Aside from the purpose statement in the ordinance, the City provided only the deposition testimony of its planning director to the effect that allowing tattoo parlors would affect the “character and fabric” of the area which “could  impact tourism” because tourists would ascribe negative associations of tattoos and the City.  Not only was the statement made after enactment of the ordinance, it was also largely unsubstantiated in fact.  Defendant conceded the two tattoo parlors “grandfathered” in the district did no harm and failed to explain or present evidence why additional establishments would do so, relying on a few lines from a Jimmy Buffet song, Margaritaville regarding an improvident decision to get a tattoo.  The court concluded the city failed to bear its burden of showing the tattoo parlor ban was a reasonable time, place and manner restriction and remanded the grant of summary judgment.

Protection of artistic expression under the First Amendment is not trivialized by the extension of that protection to activities some may find unpalatable.  The City of Key West must find additional justification to ban this form of expression.