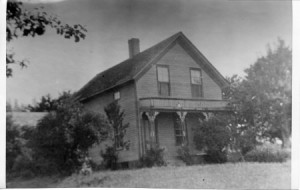 The respondent in this case, the Mary Caldwell Wilmot Trust was the successor in interest to Mr. Wilmot. In 2013, the Trust filed an application to remove the Carman House's historic designation, in order to facilitate proposed redevelopment of the property.  On January 7, 2014, the city council issued a final written decision granting the request to remove the historic designation concluding, in part, that ‘property owner’ as used in ORS 197.772(3) is not limited to the owner at the time the property was designated.

This case was appealed by the Lake Oswego Preservation Society (LOPS), a local preservation group, to the Land Use Board of Appeals.  LUBA concluded that the term “a property owner” as used in ORS 197.772(3) was not intended to include persons who become owners of a property after it is designated as historic and reversed the city’s removal decision.  The Trust sought judicial review of this order from the Oregon Court of Appeals.  The Court of Appeals disagreed with LUBA’s interpretation of the statute and reversed.  The decision turned on use of the term “a” as referring to an “unidentified, undetermined or unspecified” object coupled with no finding that the legislature intended to exclude successors-in-interest from utilizing the removal provision.  The result was to give the provision an extremely broad reading to allow de-designation by any owner of property on which a local historic designation had been imposed.

The LOPS petitioned the Oregon Supreme Court for review.  LOPS was joined in this effort by amici curiae including Restore Oregon, The National Trust for Historic Preservation, Architectural Heritage Center, the City of Portland, the City of Pendleton, the City of The Dalles, Preservation Action and Preservation Works, who filed both a petition asking the court to take the case and a brief in the matter.[1]

The Supreme Court’s decision turned entirely on legislative intent.  This is done by examining “the statutory text in context, along with its legislative history, applying as needed relevant rules and canons of construction.”  Considering the text alone, the Supreme Court agreed with the Trust that the term “a” can sometimes be synonymous with the term “any” but on the other hand, the term “a” is often used quantitatively to suggest a limitation in number i.e. those owners who owned the property at the time of designation.  In other words, with the absence of any express narrowing language, the legislature could have intended an expansive definition of “owner” or the lack of specificity could suggest that the legislature did not perceive the need to address it.

Finding either interpretation plausible, the court went on to examine the regulatory context provided by Goal 5.  Goal 5 makes no mention of owner consent and although the program ordinarily provided an opportunity for public input in the decision-making, the decision of whether to designate a historic resource was up to the local government.  The legislative history suggests a concern over the involuntary nature of the designation process that led to the adoption of ORS 197.772.  The amici argued that most of Oregon’s historic designation decisions occurred before the adoption of ORS 197.772. Allowing the removal right to run to subsequent owners, when they had notice of the designation, would compromise local governments’ abilities to achieve Goal 5.  The Supreme Court agreed and concluded that “nothing about the context of ORS 197.772(3) suggests that the legislature intended to eliminate local governments’ use of historic designations to protect and preserve historic properties long-term and therefore meet their obligations under Goal 5.” The court went on to explain that subsequent owners have notice of the designation and obtained the property at a price that takes the designation into account.  Therefore, the legislature did not intend to “dismantle” the protections for historic properties, as the Court of Appeals had concluded.

Finally, the court considered the legislative history and found that although there was nothing definitive, the testimony weighed in favor of interpreting the phrase “a property owner” as referencing only the owners at the time of designation.  The court traced the history of adoption noting that it was intended to aid property owners who had been “coerced into the historic property designation” and were awaiting a statutory remedy.  When asked whether the provision could apply to a subsequent purchaser, the Yamhill County bill drafter responded that they “frankly hadn’t thought about that.”  Since there was no indication that the legislature knew that the provision would be interpreted broadly but intended to narrow it.  Therefore, the legislature “sought to create a system where, to the extent possible, historic designations are not placed on properties unless the owner at that point in time agrees.”

Based on the foregoing, the Oregon Supreme Court determined that the right to remove a historic designation under ORS 197.772(3) applies only to those persons who owned their properties at the time that the designation was imposed and not to those who acquired them later, with the designation already in place.  The Court of Appeals decision was reversed and LUBA’s decision was affirmed.

Effect of the Ruling

The aggregate number of historic resources that are not on the National Register of Historic Places, but identified and regulated as “historic” by local communities (including inventory, local landmark, conservation landmark, and list of significant resources), is estimated to be approximately 4,000 across the state.  Although it is impossible to determine exactly the number of historic properties that have subsequently been transferred to new owners, ORS 197.772 was adopted in 1995, twenty years ago.  It has been estimated that between 50% to 80% of the properties designated before 1995 have been transferred to new owners since that time.  Increased land values coupled with increases in zoned densities provide an incentive for subsequent owners to seek the short-term windfall resulting from de-listing.  With this ruling, many of these buildings will retain their landmark designation as critical components of Oregon’s rich and varied built environment.