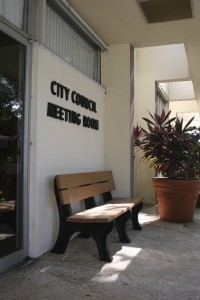 Wardany v. City of San Jacinto, 9th Circuit Case No. 11-55879 (February 14, 2013) involved the installation of a median strip in front of plaintiff’s business so as to prevent motorists from making a left turn onto the property.  Plaintiff alleged a taking, violation of procedural due process and equal protection rights, and the First Amendment speech and establishment clauses.  The District Court granted summary judgment and plaintiff appealed.

The Ninth Circuit said there must be a protected property or liberty interest under state law for many of these constitutional provisions raised to operate and found plaintiff had no such interest in any particular level of access to its property.  That property remains accessible except for a prohibited direct left hand turn into the property.  Even if there were such an interest, plaintiff is affected in the same way that other property owners along the same stretch of road are subject to the new median.  Moreover, Defendant City alleged it mailed notices of the change (although plaintiff denies receiving the same).

Having found no procedural due process violation, the Ninth Circuit also rejected plaintiff’s equal protection and First Amendment challenges as there was no discriminatory treatment on the basis of race or national origin, or differential treatment of plaintiff’s business, aside from plaintiff’s own speculation which did not create a triable issue of fact.  The previous denial of plaintiff’s cell tower request appeared to the court to be a proper application of the City’s zoning ordinance and the court noted that plaintiff could have sought a variance or asked for a rezoning of the property but declined to do so.  The court saw no connection between this denial (and the previous sign code violation dispute) and the median installation sufficient support a retaliatory motive.  Similarly, there was no establishment clause violation shown in the record except plaintiff’s suggestion that an adjacent church was attempting to buy his property.  Finally, there was no factual basis for a taking or inverse condemnation claim under either federal or California constitutional or statutory laws to support a civil rights claim.  The District Court judgment was thus affirmed.

This case illustrates the folly of spending time and money to make constitutional claims without a supportive evidentiary basis.

Read More ›
California Supreme Court Affirms Local Prohibition of Marijuana Dispensaries Despite Initiative Allowing for Medical Marijuana Use
By Foster Garvey on 6.28.13 Posted in Land Use in California

City of Riverside v. Inland Empire Patients Health and Wellness Center, Case No. 198638, (Cal., May 6, 2013) tested a local ban on facilities that distribute “medical marijuana” despite passage of an initiative that permitted those activities in limited circumstances.  Local home rule in California is enshrined in the Constitution and allows the passage and enforcement of local ordinances not in conflict with the criminal laws of the state.  This case involved the validity of Defendant City’s prohibition of the use and distribution of marijuana as a local nuisance.  The City, following the passage of the ordinance, brought injunctive proceedings against defendant and succeeded in both the trial court and the California Court of Appeals.  Defendant sought review and again claimed the local ordinances were preempted by state law.

The court commenced its analysis by examining the status of marijuana under the federal Controlled Substances Act (CSA).  In 1996, despite the federal preemption under the CSA, the voters in California passed the Compassionate Use Act (CUA) which allowed for medical use of the drug.  In 2004 the California legislature enacted the Medical Marijuana Program (MMP) to allow for the cultivation and use of marijuana in certain medical situations by excepting those activities from criminal and general nuisance laws.  These state laws have no impact on the general federal prohibition on the cultivation and use of marijuana.

The instant injunction proceedings were initiated after plaintiff notified defendant that its marijuana dispensary was not permitted under local zoning regulations.  The court said that local authority over land use in the state was an inherent police exercise rooted in the State Constitution, rather than being a legislatively delegated power.  Moreover, there is a presumption that such exercise is not preempted by state law.  To be preempted, the local ordinance must either require what the state law prohibits or prohibits what the state law demands.  No preemption will be inferred when both sets of laws may coexist.  Neither the CUA nor MMP specifically amend local zoning regulations.  The court concluded that these laws may operate concurrently.

In Ross v. RagingWire Telecommunications, Inc., 42 Cal. App. 4th 920 (2008) the court rejected an employee’s challenge to his firing for having trace amounts of a chemical related to marijuana in his blood.  In that case, the court said the relaxation on criminal laws on the use of marijuana did not extend to prevent discharge for marijuana use under an employment policy.  In the criminal law context, the California Appellate Court had read the two state acts narrowly so as not to preempt.  In City of Claremont v. Kruse, 177 Cal. App. 4th 1113 (2009), the California Court of Appeals upheld a land use moratorium on permit issuance to marijuana dispensaries, finding no express conflict between state and local law in that circumstance.  Similarly, the Court of Appeals upheld land use regulations on dispensaries in City of Los Angeles v. Hill, 192 Cal. App. 4th 761, (2011), concluding that the MMP and CUA did not confer on qualified patients and their caregivers unfettered rights to cultivate or dispense marijuana as they choose, thus upholding a regulation inquiring a separation of marijuana dispensaries from schools, playgrounds, parks, places of worship and other uses by 1,000 feet.

The court’s analysis found no express preemption of local regulations on dispensaries.  Those laws relating to cultivation and distribution of marijuana exempted by the MMP are criminal and nuisance laws, but not land use regulations.  Moreover, those acts provide no implied preemption of land use laws – they are not coextensive in their reach and local governments may regulate or prohibit those activities as a local nuisance without fear of preemption.  A combination of state law and local ordinances accommodate multi-jurisdictional interests so the California cities may adopt regulations under the State Constitution and, unless preempted by state law or unconstitutional, those regulations will apply.  The court concluded:

As we have noted, the CUA and the MMP are careful and limited forays into the subject of medical marijuana, aimed at striking a delicate balance in an area that remains controversial, and involves sensitivity in federal-state relations. We must take these laws as we find them, and their purposes and provisions are modest. They remove state-level criminal and civil sanctions from specified medical marijuana activities, but they do not establish a comprehensive state system of legalized medical marijuana; or grant a "right" of convenient access to marijuana for medicinal use; or override the zoning, licensing, and police powers of local jurisdictions; or mandate local accommodation of medical marijuana cooperatives, collectives, or dispensaries.

Of course, nothing prevents future efforts by the Legislature, or by the People, to adopt a different approach. In the meantime, however, we must conclude that Riverside’s ordinances are not preempted by state law.

Justice Liu concurred, having a slightly different view of preemption, but agreeing with the majority that the Riverside ordinance was not preempted by the MMP or CUA.

The unanimous result in this case by a well-regarded court carefully explains that exemption of certain activities from criminal and nuisance laws cannot be extended to require local governments to allow those activities under their zoning regulations.