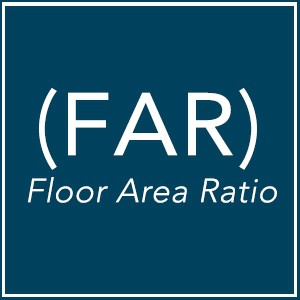 Floor area ratio – commonly referred to as FAR – is the ratio of a building’s floor area to the size of the parcel on which the building is situated.  The higher the FAR the bigger the building.  A maximum FAR limits the size of the building on a parcel and many jurisdictions, including the City of Portland, have maximum FAR standards that place limits on how large a FAR is allowed within different zones (see City Code 33.510.200).

Portland, however, like many jurisdictions, allows FAR beyond the maximum otherwise allowed by transferring FAR from one parcel to another under certain circumstances.  Generally, how this works is a parcel with a maximum FAR the owner doesn’t intend to use, can transfer the “excess FAR”, i.e., the difference between the amount of FAR the property owner intends to use, and the maximum that otherwise is allowed on the owner’s parcel, to another parcel.  The receiving parcel would then be able to “add” this additional FAR to the otherwise maximum FAR allowed on the receiving parcel and develop a bigger building.  A bigger building generally brings more value to the “receiving” parcel and the “donating” parcel will likely expect some consideration for the transfer of the excess FAR, as the “donating” parcel will enter into a covenant that runs with the land that restricts development on the donating parcel to a FAR less than the maximum otherwise allowed.

As mentioned above, additional FAR has value and consideration, which is typically paid by the receiving parcel for the additional FAR.  The WPA Parcel was receiving a significant increase in FAR from the Director Park Parcel and in return, although Fox Tower did not get any of the Bonus FAR, Fox Tower agreed to pay the City $100,000 to be used in maintaining and improving Director Park (Fox Tower and WPA are related entities- with the President of each entity being the same person).

But that is not the only consideration that was provided under the parties “Bonus FAR Amendment” as this Amendment provides if WPA elected to contract for security and janitorial services at its building that it would only contract “with contractors whose employees that directly perform security and janitorial services …. are represented in collective bargaining by a labor union” and “if the WPA employs persons directly to perform such work, WPA shall remain neutral during any union organizing campaign directed at security and janitorial employees …. and shall recognize the union as the representative of such employees upon a showing of majority status by the union through cards signed by such employees authorizing union representation.”

As stated above FAR has value and it is common when FAR is conveyed from one parcel to another that consideration is paid.  In this case the City as the owner of the donating parcel is receiving consideration in the form of $100,000 to maintain Director Park.  The other consideration granted was the above obligation of the WPA owner to use union labor.  An obvious question is “why” was this included in the Bonus FAR Amendment?   Was this an effort to obtain some assurance that those affected employees might receive a livable wage?  Another question is “how” did this consideration end up in the Bonus FAR Amendment?  Was it proposed by the City?  The answers to these questions are not known, but there is an answer to “who” is benefitted by this consideration.  The “who” is organized labor.

It must have been an interesting negotiation