The Mortenson team proposed four development options, two options for the StarTerra, LLC property (directly north of the OCC) and two options for the PDC-owned site (directly east of the OCC). For each site, Mortenson proposed two different development programs achieving approximately 600 rooms. The development program options include: 1) a 600-room Hyatt Regency or 2) a combination 420+/-room Hyatt Regency and 181-room Hyatt Place. Metro favored the Mortenson team because this team has extensive hotel development and financing experience. Further, Metro recognized that Hyatt currently does not have a strong presence in the Portland market and a Hyatt Regency hotel could serve national convention clients at the convention center as well as introduce new corporate Hyatt-based group business in Portland. 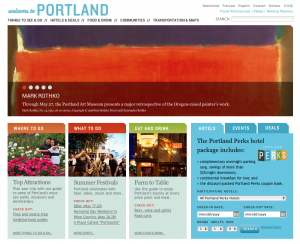 What do the Oregon Zoo, the Portland Timbers, NBC Universal’s television series Grimm, Timberline Lodge, the Oregon Brewers Festival, the Safeway Waterfront Blues Festival, the Intertwine, the Portland Highland Games and the Oregon Dental Association all have in common? They were all recognized at the 33rd Annual Tourism & Hospitality Industry Awards Celebration breakfast, hosted by Travel Portland. Hosted during the celebration of Travel & Tourism Week presented by the U.S. Travel Association May 8-15, 2012, Travel Portland had a lot to celebrate.