By Melodie Virtue on 10.3.14 Posted in Hotels, Wi-Fi hotspots
PDF 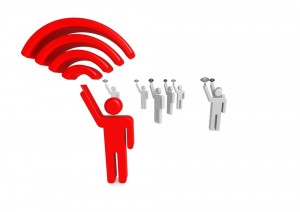 Marriott International, Inc. found out the expensive way that it should not disable customers’ mobile hotspots. It entered a Consent Decree with the Federal Communications Commission (“FCC”) in which it agreed to pay $600,000 to the U.S. Treasury.

A number of mobile devices, such as smart phones, can serve as a wireless access point to the Internet, sometimes called Wi-Fi hot spots. Consumers use these devices to connect their laptops to the Internet through their smart phones. Marriott employees at Gaylord Opryland, which Marriott manages, were using Wi-Fi monitoring systems with containment features to de-authenticate guest-created Wi-Fi hotspots in their conference facilities, ballrooms, guest rooms or public areas. Meanwhile, Marriott had been charging conference exhibitors and attendees from $250 to $1000 per device to use the Gaylord Wi-Fi service in its conference facilities.

An individual complained to the FCC that he could not use his mobile hotspot in the convention space at a function at Gaylord Opryland. The FCC investigated Marriott’s compliance with Section 333 of the Communications Act, which prohibits any person from interfering with any radio communications equipment licensed or authorized by the Communications Act. To resolve that investigation, Marriott agreed to enter into a Consent Decree with the FCC requiring Marriott to pay the U.S. Treasury $600,000 and to file compliance reports for the next three years.

Marriott has since instructed the properties under its management to cease using containment equipment in any way to block consumer’s mobile hotspots. More information about impermissible Wi-Fi blocking practices is at www.fcc.gov/jammers.