The Old One-Two: Boxing and the Practice of Law

By Ruth Walters on 9.13.13 Posted in Garvey Schubert Barer
PDF

Today, after a week of difficult negotiations with huge telecommunications companies on behalf of my hotel clients, a week of wondering what to write for this blog, and a challenging sparring session on Wednesday, it occurred to me to write a bit about boxing. A lot of people hate lawyers and a lot of people think boxing is a violent, brutish sport that should be shunned in a civilized society. I’m a lawyer and I box. Full disclosure: I'm taking boxing lessons at Cappy’s Boxing Gym in Seattle, and the gym is a client of the firm. The thoughts in this post are my own and not our client’s. Finally, and for the record, I have never punched anyone or anything at work. I promise. 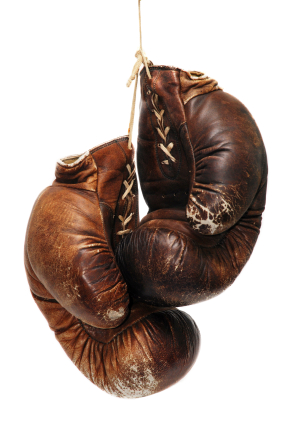 The analogy between lawyering and boxing is obvious: fight with words, fight with fists, both within a structure of rules, standards and strategies governing how and when to attack, how and when to defend and how and when to take a hit or two in order to set up a stronger or more important punch. In amateur boxing, the point is not to leave your opponent bleeding and broken on the canvas for a 10 count; it’s about being skilled—agile, flexible, strong, focused. My experience getting in the ring occurs when I spar with a partner, rather than compete with an opponent. At my gym and my level of ability, sparring is learning to apply fundamentals (punches, stance, body position, cover, blocks and parries) in a version of the “real world”—fluid and often unpredictable and, most importantly, a real world that contains a partner, a coach, noise, lights, and a lot of other stimuli. At the gym where I box, sparring is also about helping my partner improve her own skills, which requires me to listen, observe and focus even more carefully.

The same can be said for negotiating an agreement on behalf of a client. It’s less sweaty (although sometimes no less exhausting) but the goal is still the same—a mutually beneficial solution, where each party feels as though it’s taken a few punches, defended well against a few, and landed a few. At the end, we touch gloves and leave the ring with respect and dignity and an arrangement that probably looks different than either party imagined at the outset. After all, contracts are only negotiated when both parties want something good to happen between them. My role is to advance my client’s interests as vigorously as possible, while always keeping my cover up and defending them from exposure to significant risk. The negotiations themselves are always fluid and shifting; I’ve learned over the years and in the ring how to better “think on my feet,” to listen and adjust my angle of attack or defense, or just step back and wait the other side out.

And just as I’ve left the ring with my nose throbbing and my sides aching after sparring with a more skilled partner, I’ve left my office feeling brutalized after a negotiation with a potential provider who is brawnier, bigger and far more powerful than I am or my client is (see, e.g. gigantic telecommunications companies). It’s less satisfying than sparring with a more evenly matched partner, but I always manage to get a few good licks in.

As anyone who reads this blog can see, the Hospitality, Travel & Tourism group keeps up on legal developments, attends conferences, and writes for journals—we do legal theory and legal knowledge. We also have years and years of cumulative practical experience, bringing that theory out into the world of our clients. Being a good lawyer is a constant dance (pun intended) between the “right” and the “practical,” taking on the desires of my client as my own, advising that same client of the risks they’re undertaking, and, of course, getting in the ring with the other side and working each other out.

None of this is to say that negotiating contracts for my clients is a game with no real consequences, nor is it to say that when I negotiate deals for my clients that I am thinking only of myself. Quite the opposite—my clients’ interests are paramount in any negotiation. They are, to force the analogy a bit, the most fundamental of fundamentals.  The sparring comes in presenting and defending those interests, staying focused on the ultimate goal and removing my ego and my pride from the equation. In other words, sometimes those pretty flicking jabs are totally useless and, well, you just can’t take those right hooks that feel like they came all the way from Oklahoma personally. It’s all part of the movement and flow of negotiation—just don’t let them get you on the ropes, right?