By Greg Duff on 3.27.14 Posted in Conference Notes

For those of you who attended, or even those of you who did not attend, below are the slides from my recent presentation in New Orleans at the Executive Vendor Summit. Feel free to contact me if you have any questions. 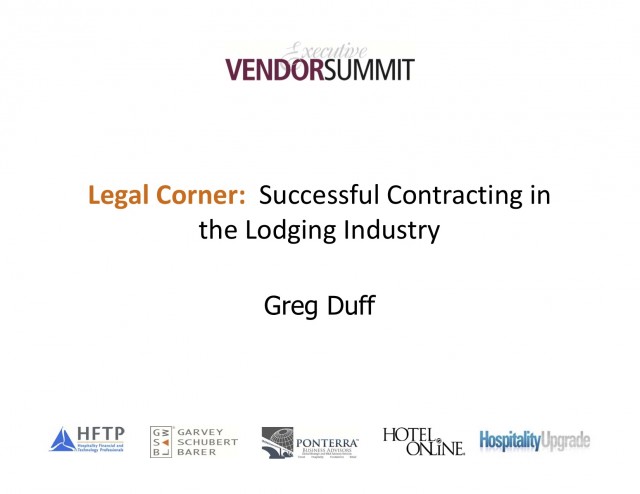 It is no secret that wage and hour class actions are among the “hot topic” law suits that are on the increase. Like too many people, when I hear “class action” my heart starts to race, beads of sweat break out on my forehead and I start to feel sick to my stomach…and I don’t even own the business that is named in the suit. I just know the wage and hour cases are time intensive and expensive to defend. Wage and hour class actions often deal with the tried and true wage claims, misclassification of exempt employees as well as the overtime claims that go hand in hand with the misclassification. However, occasionally one comes along that makes you stop and think.

On Monday March 3, 2014, a Multnomah County Circuit judge agreed with the Multnomah County Elections Director and brought a new hotel at the Oregon Convention Center one step closer to fruition. A Convention Center Hotel has long been desired by a variety of tourism and economic development interests who argue that such hotel will allow Portland to host larger events at the Convention Center. As long as those supporters have been around, so too have opponents of such a hotel, who argue that the economic benefits of such a hotel are overstated and may also harm their economic interests and should not qualify for public subsidies. In 2013, Metro and other local jurisdictions seemed to be coalescing around a plan that would bring the hotel to the Convention Center, but one aspect of the plan ran into a snag and ended up in court.