By Sara Sandford and Test on 3.1.19 Posted in EU, Japan, Trade Agreements
PDF 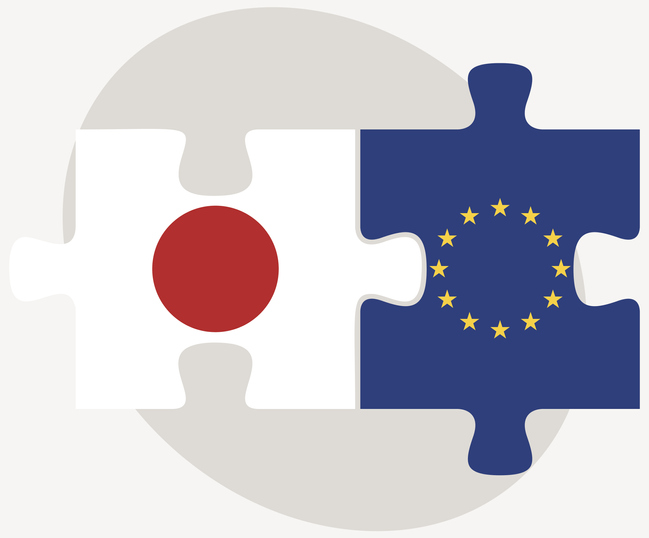 "Europe and Japan are sending a message to the world about the future of open and fair trade. We are opening a new marketplace home to 635 million people and almost a third of the world's Gross Domestic Product, bringing the people of Europe and Japan closer together than ever before. The new agreement will give consumers greater choice and cheaper prices; it will protect great European products in Japan and vice-versa, such as the Austrian Tiroler Speck or Kobe Beef; it will give small businesses on both sides the chance to branch out to a completely new market; it will save European companies 1 billion euro in duties every year and turbo-boost the trade we already do together. More than anything, our agreement shows that trade is about more than quotas and tariffs, or millions and billions. It is about values, principles and fairness. It makes sure that our principles in areas such as labour, safety, climate and consumer protection are the global gold-standard. This only happens when you work with the most natural of partners, separated by thousands of kilometres but united in friendship and values."

This new free-trade agreement (Japan/EU FTA) and the ratified TPP-11 are viewed as keys to stimulating growth for the Japanese economy. The Japan Times reported on February 1 that the Japanese government estimates these initiatives will boost the economy by over $130 billion. The trade deal was also touted as a rejection of digital protectionism, encouraging the free and secure cross-border flow of data. Countries may operate in other member countries without risking mandatory disclosure of trade secrets. “Ahead of the G20 summit tomorrow, I believe Japan and the EU are demonstrating our strong political will to fly the flag for free trade against a shift toward protectionism,” Japanese Prime Minister Shinzo Abe commented at a news conference.

On February 7, 2019, the U.S. Congressional Research Service commented, "As the EU-Japan FTA is implemented, the United States will be under increased stakeholders' pressure to secure comparable access to these important markets…The FTA not only has implications commercially for the United States, but also for the U.S. role in shaping debates over trade rules in areas central to U.S. competitiveness." Without such arrangements, U.S. industries could face competitive disadvantages or lost market share.

Among many EU free trade agreements, the Japan/EU FTA is also the latest agreement to bring an increasingly large number of countries under EU FTA rules. Such agreements may impact the United States' ability to influence world trade, as these FTAs set precedents far and wide.

It remains to be seen whether U.S. efforts with Japan to address new subsidies and state-owned enterprise rules and efforts on digital trade will strengthen the U.S. position, but there is no doubt that both the EU and Japan are quite enthused about their new agreement. They will convene meetings in April to assess the agreement's implementation and continue negotiations in March in other related areas such as rules relating to investment protection.