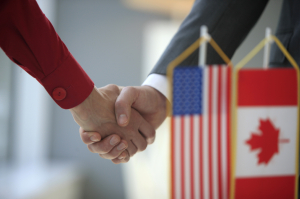 Canadian citizens already benefit from some of the least bureaucratic processes for admission to the U.S., whether as pleasure or business visitors, or for U.S. employment.  Things may get even better, as announced by the Department of Homeland Security (“DHS”) in January.

For citizens of most countries, admission to the U.S. is usually the second part of a two-step, or even three-step process.  For pleasure or business visitors, it includes (a) an application for a visa at a U.S. consulate and (b) admission at a port-of-entry, whether air, sea or land.  Those people seeking U.S. employment authorization must endure an additional step in the process before the two noted above; government approval of that employment.

Citizens of 38 countries can eliminate the visa part of the process through the Visa Waiver Program (“VWP,”) but their admission is for 90 days only.  (There have been some rumblings in Congress about the lack of security  associated with the VWP after the recent terrorist attacks in France.  Stay tuned for possible changes.)  Admission with an actual, consulate-issued visitor visa is usually for up to six months at a time.

Not only are visas are not required for Canadian citizen visitors, they can be admitted for six months instead of just 90 days, just like for those people with a visa.  This special consideration for Canadian citizens eliminates the time and expense of the visa application process, speeds admission at the ports of entry, and increases the period of admission.

Canadian citizens also benefit from Canada-specific procedures involving seeking U.S. employment authorization. Perhaps the most notable is U.S. employment approved through the North America Free Trade Agreement (“NAFTA”).  Certain professional employment in the U.S. can be applied for, adjudicated and approved at most U.S. ports of entry and U.S. international airports, as well as most Canadian international airports and even some in Europe, with no complicated application form, for only $50 USD. While mail-in applications are also an option, that format requires a form and increases both the filing fee (to $325) and review time (by at least 1 month unless an additional “premium processing” fee of $1,225 is paid for review within 15 calendar days).   Approval of up to three years at a time can be issued repeatedly.

Like with NAFTA filings, Canadian citizens transferred to be employed in the U.S. under the Intracompany Transferee (L) process, never have to use the visa application step, and can eliminate the mail-in application process (by filing directly at many U.S.-Canada ports of entry or most Canadian international airports).  Unlike NAFTA cases, the filing fee is the same, regardless of the filing location.  A distinct benefit of not filing by mail is that approvals can be for as many as three-years at a time for each filing, whereas for citizens of other countries, approvals can be for as many as three years for the first filing only.  The L process includes an option, called the “blanket petition” that can reduce the corporate documentation requirement for certain international businesses.

Most other U.S. employment classifications for Canadian citizens require the same mail-in process as for citizens of other countries, but still eliminate the need for a visa, thereby eliminating the time and expense of a consulate appointment. The January 14 announcement suggests we may soon see some additional benefits for Canadian citizens seeking U.S. employment if they seek admission along the northern border ports of entry.

The Department of Homeland Security announced in mid-January that it is considering a “Known Employer” pilot program to streamline adjudication of certain, unspecified types of employment-based immigration benefit requests filed by eligible U.S. employers.   This suggests that it may apply to TN, L, H, or other classifications. The department expects to launch the pilot by late 2015 to test a program designed to:

A goal of the program would be to expedite or otherwise facilitate legitimate cross-border business travel along the northern border ports of entry. This pilot program is a binational commitment under the NAFTA and the U.S.-Canada Beyond the Border initiative. In particular, one specific commitment made by the U.S. and Canadian governments under the Beyond the Border initiative is to “explore the feasibility of incorporating a trusted employer concept in the processing of business travelers between Canada and the United States.”

We won’t know the specifics of the DHS “Known Employer” Pilot Program for some time, but we can hope that prospective U.S. employers of Canadian citizens may find that the process will become even faster and less burdensome in some ways than currently available by late 2015.